Pursuing with abandon what interested me in childhood and developing the ability to think for myself and express my opinions has been useful to my work as an attorney, which demands the ability to be flexible. 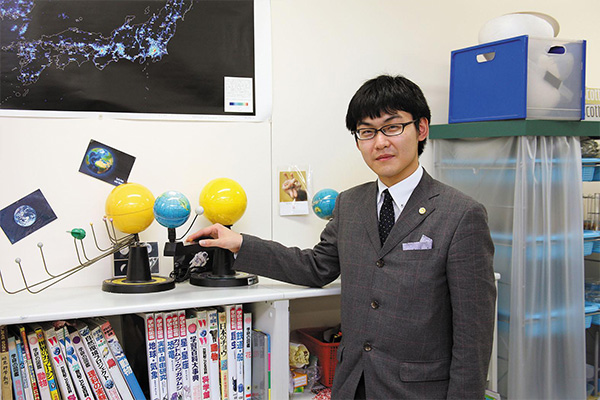 How old were you when you started attending the Dalton School?

Iwata:I was two years old when I started going to Dalton's Nagoya School, which was just a few minutes' walk from my home. Evidently, my parents wanted to let me develop my individuality and thinking ability in a liberal environment, rather than at some kindergarten with a special education program to raise so-called gifted children. Then, in the summer when I was two, my father was transferred to Tokyo, so I switched to Dalton's Tokyo School. I was enrolled in the Play Group for two-year-olds, which met two or three times a week. The Tokyo School was a little far from our home, however. The Play Group for three-year-olds met every day, and the commute would have been a burden for my mother, so it seems she looked into having me go to a nearby kindergarten. We visited several kindergartens in the vicinity, but I threw a tantrum and proclaimed that Dalton was the best. (laughs) Ultimately, I entered the Tokyo School, and my mother drove me back and forth.

What memories do you have of your time at Dalton?

Iwata:I clearly remember doing a variety of experiments and lab work on the roof. We dissected eyes from real cows and peered at the crystalline lens of the eye and other structures. We also planted seeds, grew and harvested vegetables, and then cut them up to make curry, which we ate.

That kind of hands-on learning later proved useful in studying for my middle school exams. The things I experienced in childhood, even once forgotten, came back to me five or ten years later when I encountered them in the form of information. The memories that came back to me were accompanied by a felt sense of my experiences at Dalton. 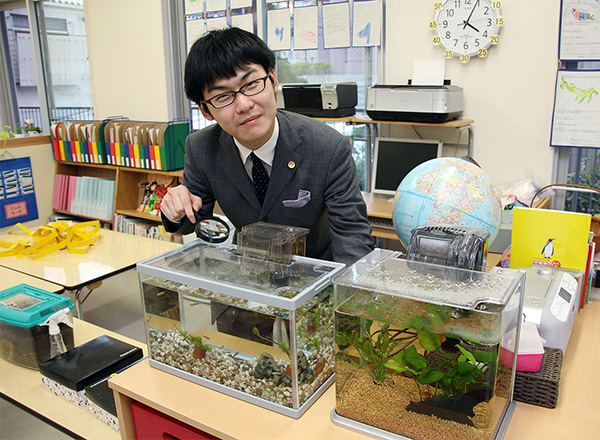 My experiences at Dalton enabled the hands-on approach to learning to really sink in, which I also think is meaningful. From the time I was in third grade, for example, I took the train alone all over the place. I was still a child, so of course I didn't go too far. I stayed mainly within the city of Nagoya, which was my home at the time. Since the geography we learned in elementary school focused on local areas, I could really associate most of the things I learned in class with the places I visited through actual experiences.

My interests broadened from constellations to planets and then to the Greek myths.

What other things made impressions on you from your time at Dalton?

Iwata:Dalton provided a wealth of opportunities to foster children's interest in science in a way that was really natural. For example, classes were named for constellations, so there was the Orion class, the Centaurus class, etc. I thought it was strange that we were given these names I'd never heard of (laughs), so I asked the teacher. I was taught about the constellations and immersed myself in a book on them. This led me to look into the planets, which inspired me to read through the Greek myths. In this way, the scope of my interests broadened. When you really learn all about something, you want to talk about it with other people. Dalton provided many opportunities for giving presentations, which allowed me to satisfy my urge to communicate.

What do you remember about those presentations?

Iwata:Just like we presented to our classmates every week, a few times a year we had the opportunity to present to everyone. Although constellations were the primary subject, when our interests broadened, like I mentioned, we also presented related subjects. At Dalton, many of the children were "meticulous types" who would become obsessed with one subject and research it exhaustively, so there were topics where our interests overlapped. 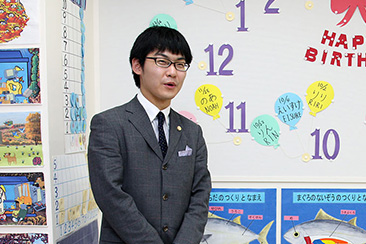 These kids would ask sharp questions, which strengthened my desire to deepen my knowledge. Although we were preschoolers, we were pretty well knowledgeable when it came to our special interests. Looking back, I think we had fairly intellectual conversations!

Even after you entered elementary school you went to Dalton's After School program, didn't you?

Iwata:The summer when I was in the last year of kindergarten, my father was transferred back to Nagoya, so I re-entered and graduated from Dalton's Nagoya School. I am probably one of only a few people to attend both the Tokyo School and the Nagoya School. I think the curriculum and the atmosphere were basically the same. Even after I entered elementary school, I continued to attend the After School Program. I think it all came down to the fact that I simply liked Dalton's environment. What made the greatest impression on me in the After School Program was the Science Room. The teacher in charge was stationed there, and we could freely use all the laboratory instruments. I enjoyed conducting a variety of science experiments.

What prompted you to consider becoming an attorney?

Iwata:From the time I was in elementary school, I had the vague sense that I was cut out to be an attorney. I was an argumentative child (laughs) - the type of child who wouldn't do as I was told unless people convinced me by explaining things logically. The Dalton teachers, realizing the kind of child I was, never just ordered me around without providing explanations, nor did they just leave me to be on my own. They kindly and carefully explained things, using words a child would understand. That kind of environment was very comfortable to be in. In any case, because I loved reason, I felt, in my child's heart, that I would have an aptitude for law.

I was in junior high school when I resolved to become an attorney. My grandfather passed away, and I witnessed the various problems that cropped up concerning the inheritance. I thought that if I had knowledge of the law and a proper position, things wouldn't have happened the way they did. I resolved to become an attorney so that people without knowledge of law would not be at a disadvantage.

After entering Keio University's Faculty of Law, what activities did you focus on?

Iwata:I belonged to a law club at school, and every year we had joint debate tournaments with other universities, such as Waseda, Doshisha and Ritsumeikan. First, there was a selection at Keio of who would be in the tournaments. Even during the summer vacation, we would gather on campus to practice debating sessions every two days. As the day of the tournament became closer, our sessions were held every day. The actual tournament method was for a student from one university to make presentations on the subjects of law that were given. Students from the other universities would then present rebuttals. The point was to see how much the presenters could be tripped up by difficult questions. (laughs) Whether because of the presentation skills and ability to question that I had gained at Dalton or because of daily debating practices, I won the tournament when I was a university sophomore.

Were your experiences with club activities useful when you sought to take the bar exam?

Iwata:After graduating university, I went on to law school and studied for the bar. Studying for the bar mainly entails doing practice exams based on each student's standardized legal knowledge. We would all argue about what corrections should be made in answers prepared by each student, then would all discuss as to what the best answer would be. Mastering knowledge alone is not enough, however. Without the ability to think logically and express opinions, law school students won't be able to keep up with such group studies. I believe that the ability to think and express myself that I developed through club activities was a great help.

Tell us about the career you've had since graduating.

Iwata:After law school, I passed the bar exam. I then had one year of legal training, after which I entered the legal professional corporation Excel International Law Firm, at which I am an attorney. Right now I want to gain as varied experience as possible. I'm working on a variety of cases, both civil and criminal. One of my clients is a company involved in care services. Since its founding, which I was also involved in, I've made it a goal to increase my expertise concerning care-related law.

The care service industry lags behind other industries in terms of some aspects of the concept of compliance. There are more than a few cases of problems with labor conditions, troubles involving residents, as well as insufficient provisions in terms of facility crisis management and the like. I'd like to do what I can to support the reinforcement of compliance systems and to make even a small contribution to the development of the care service industry.

What are your future goals?

Iwata:Last year, I became qualified as a political secretary for the Diet members. In my work as an attorney, I have come to believe that there are limits to what can be resolved with the judicial administration alone. In the future, I am considering getting involved with drafting bills from the position of a political secretary.

Attorneys need the ability to anticipate counterarguments when building cases.

Is there anything you learned at Dalton that you feel has played a part in your career up to the present?

Iwata:I feel that at Dalton, I developed the ability to think for myself and express my opinions and this has played a major part in my career. The work of being an attorney doesn't allow one to just follow instructions. When we listen to clients, we can't just listen: we have to actively elicit facts that support the client's case while anticipating opposing counsel's rebuttal. Also, during cross-examinations in court, people sometimes suddenly blurt out unexpected answers. At such times, an attorney must judge the situation appropriately and ask questions that will put the client in an advantageous position. I'm convinced that my abilities are based on having had the experience, while at Dalton, of being able to choose what I wanted to do and pursue it wholeheartedly. Such abilities were also cultivated by giving presentations in front of everyone and responding to their questions.

In closing, do you have any message for parents who are considering having their children learn at Dalton?

Iwata:What I'd like to say is that Dalton is not necessarily the place for raising the "good child" ? the child who will obligingly do what his or her parents ask. What a Dalton education will cultivate is the ability to act for oneself, which makes it hard to become someone who simply obeys orders given from the top. However, in the future, there will be a need for capable people with resolute determination to think and choose for themselves, who will carve out their own paths in life, and who will be able to take responsibility for their actions. Such people will be the leaders of the future, and I think Dalton will develop them, in a major way.

Noriaki Iwata
Born in 1983. Due to father's transfer, he attended both Tokyo and Nagoya Dalton schools between the period from the two-year old class to elementary school fourth grade. After graduating from Kaisei Junior and Senior High Schools, he enrolled in the University Entrance Exam Preparatory Program at Kawaijuku Komaba School and entered Keio University, Faculty of Law from which he graduated in March 2007. He then completed Master's studies at Keio University Law School and passed the bar exam in 2009. He has been active as an attorney since 2010. 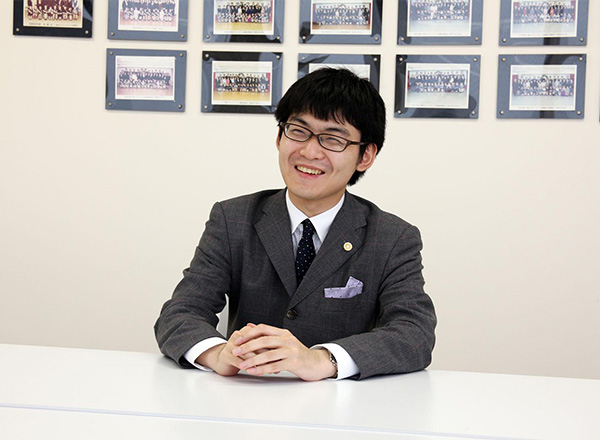