Learning at the Dalton School helped me develop with no resistance to different cultures, which later on inspired me to study abroad. 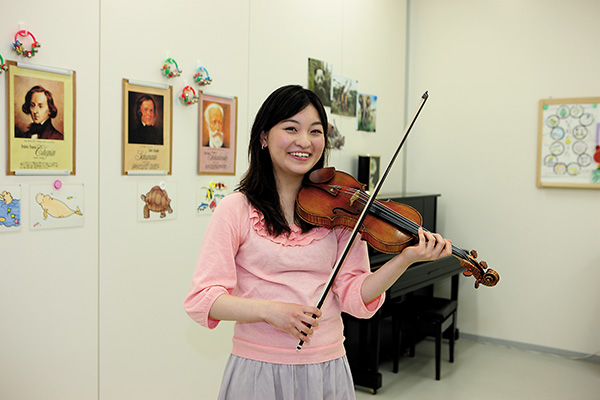 I have so many happy memories – of art class, field trips around town, etc.

・・How did you start attending the Dalton School?

Sawai:My sister, who is eleven years older, was attending Kawaijuku's High School Green Course. The Dalton School was right next door and my mother, who had heard that the education it provided was ground-breaking, brought home some information on the courses for small children. I went there for two years, starting when I was four.

・・What memories do you have of your time at Dalton?

Sawai:I have so many happy memories. The other day I was looking through a photo album from that time. There were photos of me and my father playing with screw-type blocks and photos of me "weaving" with material from stockings. It made me nostalgic.

What I really loved was art class. In addition to painting, we made art objects from twigs we picked up at the park. We also tried our hand at making buildings. I also chose art in the After School Program (a program with selection options; now known as the Serendipity Program). I enjoyed making chairs and pottery. What really made an impression on me was the time when our desks were laid out with reproductions of paintings of famous artists. We got to choose our favorite pictures and copy them. My friend chose a picture by Picasso and did a fantastic job. I was greatly impressed, even as a child, at the amazing talent my classmate demonstrated. I chose a picture by a Japanese artist. I couldn't read kanji yet, so I don't know whose it was. (laughs)

At the Dalton School, learning didn't only take place inside the classroom; the nearby town was also considered an important place for learning. City as a Classroom was established as a class. I remember looking forward to our outings to the post office, the udon-noodles eatery, and a variety of other places. I also have some photos of how after returning to the classroom, we replicated the post office, making stamps, and sorting mail.

・・You really remember a lot of things, even though you were just in kindergarten.

Sawai:It's likely because it was that much fun! In contrast, I remember almost nothing about elementary school.(laughs) At the Dalton School something made an impression every day. I think it was really fulfilling.

Our original dramas expanded my interest in the world.

・・What teacher made an impression on you?

Sawai:Marian B. Plexico (the former principal of the New York Dalton School and currently the supervisor of the Tokyo and Nagoya Dalton School). She translated English books into Japanese and read them to us. I think that even though we were children and the teacher was speaking to us in Japanese, we knew the books were in English.

Looking back now, the Dalton School likely had the hope that children would be interested in different cultures. We would create these original dramas with characters from various countries. I once played a Swiss person. Prior to the performance, we researched on the countries we would be representing and I found out a lot of things about Switzerland. The only rule was that during the play, we had to greet the audience in our character's native language. I said "Guten Morgen" in German, one of Switzerland's official languages, while the person playing the Hawaiian character said "Good morning." Of course we weren't able to perform the whole thing in those other languages, so everything but the greetings was in Japanese. (laughs)

These experiences were opportunities for me to expand my interest in the world. I was particularly interested in English, so for elementary school, I entered the Elementary School to Kunitachi College of Music, which even then had English classes. At the Dalton School, I had become familiar with English as I played with the teachers who were native speakers, so I smoothly adapted to the English classes at elementary school. Also, after graduating high school, I studied in Russia. My time at the Dalton School allowed me to develop without a resistance to different cultures, which l feel expanded my options in terms of where I chose to study.

After graduating high school, I studied in Russia. I went on to win first prize in an international competition.

・・When did you start playing the violin?

Sawai:When I was three. My mother, a music college graduate, was a piano teacher, and my father also played piano as a hobby, so I've been around music since I was very young.

・・How were the music classes at the Dalton School?

・・After graduating from high school, how did you come to study in Russia?

Sawai:When I was in high school, I went to a concert given by Nikolay Sachenko (the first-prize winner in the violin category of the 1998 International Tchaikovsky Competition) and was very much moved. That was how the idea of studying in Russia grew stronger. I studied for five years at the St. Petersburg Conservatory.

In 2005, while I was studying abroad, I won first prize in the violin category at the Fourth Alexander Glazunov International Competition. My confidence in my ability to work as a professional musician grew. When I graduated from the Conservatory, I also became certified as a Russian national performer. One option was to continue my activities by becoming a member of a Russian orchestra. However, there are almost no foreign members in Russian orchestras and work visas are not easy to procure. Even if I had been able to join an orchestra, I would have had to return to Japan every three months. For this reason, I gave up continuing my performance activities in Russia and sought opportunities in Japan.

・・What are you mainly doing at present?

Sawai:In addition to teaching young people at violin school, I'm also performing at events and other occasions. The other day, I played for children in the three-year old class at the Dalton School. I selected Disney tunes, which I thought would be easy for them to relate to. Previously, I had performed for children in the five-year old class. They asked me some fairly high-level questions, such as, "What's fun about playing the violin?" and "How does a violin make sounds?" As can been seen from such questions, many children at the Dalton School are the proactive type. For the younger three-year olds, it's enough to have them simply enjoy the sound, without having them think up questions. I gained a fresh perspective on how children grow so quickly in just a few years.

What's important in childhood is to pursue what you're interested in with all your heart.

・・What future goals do you have?

Sawai:First of all, I'd like to expand the scope of my activities by becoming an orchestra member.

・・Is there anything you learned at Dalton that you feel has played a part in your work as a musician?

Sawai:Yes. If all we know is music, our playing will have no breadth or depth. I think that being interested in a variety of areas is indispensable to a musician. Dalton School art classes planted this seed in me. Even now, I frequently go to art galleries and other museums because I'm interested in having access to a variety of works of art.

・・In closing, do you have any message for parents with children who will be going off to kindergarten?

Sawai:What's important in childhood is not to be coerced into things by those around you but to pursue what you're interested in with all your heart. The Dalton School was precisely that kind of environment. Within it, I was able to discover my own special individuality and have been able to expand my interest in the world.

Ai Sawai
Born in Kanagawa Prefecture in 1983. She started violin when she was three years old. She attended Dalton School in Tokyo between the ages of four to six. After graduating from Tokyo College of Music High School, she enrolled in Russia's St. Petersburg State Conservatory in 2004. The following year, she won first prize in the violin category at the Alexander Glazunov International Competition. While a student at the Conservatory, she was actively engaged in concert performances and graduated with top honors in 2009. Concurrent with her graduation, she was certified as a Russian national performer. She currently teaches at a music school in Japan and is also active in performing in orchestras and at various events (Ms. Sawai: Second person from the right). 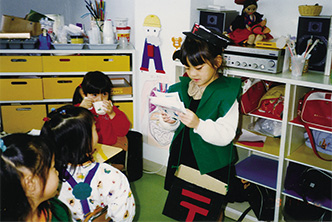